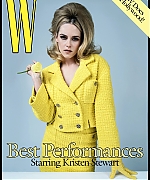 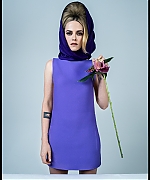 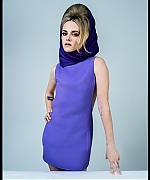 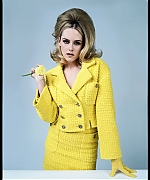 W MAGAZINE – Kristen Stewart may not care if she gets an Oscar nomination for her stirring turn as Princess Diana in Spencer, but the odds are in her favor. The 31-year-old says she plunged new depths of emotion in order to channel the fragility and disquietude of the beloved royal at a moment when she was on the verge of coming undone. Meanwhile, the actress’s personal life has been on a much more blissful trajectory. Last November, she announced that she was engaged to her longtime girlfriend Dylan Meyer and joked that Guy Fieri should officiate. For W’s annual Best Performances issue, Stewart discusses growing up on camera, bringing Diana to life, and why singing Blink-182 is her safe place.

You started acting when you were 9. Did you know immediately that this was what you wanted to do with your life?

When I made my first film, The Safety of Objects, I was like, “This is it. This is the feeling.” I’ve been chasing that ever since. It’s that sense of creating something together with others. It was exciting to see how many versions of myself I could find.

How did Spencer come to you?

Pablo Larraín called one day and said that he endeavored to make a movie about Diana Spencer. I was like, “Who is that?” It’s actually Princess Diana. And that was her real name. His movie is a three-day meditation, fever dream–poem, attempting to imagine what a certain period of time felt like for her, as she was trying to carve out what her identity was.

Was it difficult negotiating the external—the hair, the dresses, the look of Diana—with her internal state?

The whole movie’s perspective is incredibly internal, so I never had to deliver a heightened performance. I was actually just reacting to the elements that were in the room with me. Physically, it was about seeing how much I could put myself through, how cold I could get, how skinny I could get, how tired I could get. I still felt 10 feet tall, though. There’s something about her, even just by osmosis, just imagining her as a figure, the things that I’ve been impressed by, the things that I’ve felt protective of, the things that worry me about her, they’re still oddly, unshakably strong. By the end of the movie, I was like, “Okay, I actually could keep going.” I really tried to pummel myself into the ground on this one. I definitely attribute that to this spooky transference, her energy, who she was, it was unstoppable.

I just couldn’t say no. I’m stunned by Pablo’s presence. As an actor, looking at directors to work with, obviously you look at their work, but also it’s how they fill a room, how they talk to you, what the feeling is on the phone call when they’re presenting a new idea. It felt in that moment—I could assign a million words to it—it would just be truer to say it was too tempting to shy away from.

At what point in your career did you start thinking about directing?

When I was younger, I used to ask every adult actor that I was working with, “Would you ever be directed by a kid under 18?” And it was always like, “Well, I think I’d have to sit down and really talk to that person.” [And I said,] “Okay, well, let’s talk.”

Have you ever been starstruck?

Yeah. I saw Neve Campbell in a restaurant the other day, and I looked over my shoulder and did this thing that I hate when people do [it] to me, where they look and then snap back and pretend they didn’t see or something. I’m like, “Just come say hi.” And then my friend was like, “You should just go say hi.” I was like, “No way.” And then she invited us to sit down and chat for a minute. I was like, “Man, I need to go see Scream [Five].” I love that series so much. But it’s funny who actually starstrikes you. It’s never who you expect. It’s a physical thing—maybe you love a musician, maybe you love an actor so much, but you see them and you’re like, “Yeah, cool. That’s them. They’re a person.” There are some people that just get in there. Physically. And then your body goes, ahh.

Do you follow astrology? Are you a true Aries?

Do you have a karaoke song? You once played Joan Jett.

I think it’s nice when people really go for it. I love when people strike that balance of performing and leaning into the silliness of karaoke but not taking their minute to let everyone know they’re actually a great singer. That makes me cringe. I haven’t found my balance yet. I usually just scream Blink-182, because that’s my safe place.

Growing up as an actor, what was some good advice you received?

I actually, ironically, have been told several times, if interviews or press become heavier, you start to feel some version of an identity crisis in the melée. When I was younger, it would always be like, well, just go out there and be somebody else. And that is a line that is in Spencer—there has to be two of you. Sometimes you have to make your body do things you hate. There’s just no way to do it other than your way. This sounds so contrite, but I don’t know how to be someone else, which is a gift, and also I think true for anyone. That’s still the version of you being someone else. And I know that this is a weird answer for “What’s the best advice you’ve ever been given?” It’s just absorbing people and their truth and then going, “Okay, mine’s allowed to be what mine is.”

Have you ever had that big identity crisis moment and think you didn’t want to do this?

Never. I’ve definitely wanted to go back in time and not do certain jobs, but again, there’s no way out but through. Have I ever taken a few steps back and gone, “Maybe a different path is the one for me?” I just have this infinite choice. I just am constantly going, “I don’t have one path. I have like 500 million paths that I could choose.” I mean, how many movies can I make a year? Probably three, four. I’m like, “That’s too many.” But just imagine how many experiences. I don’t know any other lifestyle that would give that to me. And I’m so addicted at this point. I can’t stop.